It begins in the Fosse aux Ours, as an extension of the Pont de la Guillotière between the Quai Augagneur and the Quai Claude Bernard, between the Place Jutard and the Place Raspail. It goes as far as the railway at the junction of the Boulevard Vivier Merle and the Boulevard des Tchécoslovaques beyond which it extends via the Cours Albert Thomas. On arrival in the Place Jutard, you will find one of the finest views of Lyon with the Rhone gap, the Hôtel Dieu and hills which are beyond the Presqu’Île. it is one of the large access routes to the city centre, because beyond the bridge the Rue de la Barre leads to the Place Bellecour.
Between 1840 and 1865, construction of the Cours des Brosses. It begins at the Place du Pont and ends at the Avenue de Saxe.
In 1854 the reorganisation of the urban network on the Left Bank plans the extension of the Cours des Brosses as far as Grange Blanche, thus replacing the old road.
In 1870 the Cours is extended as far as the railway.
In 1876 the Cours des Brosses becomes the Cours Gambetta. 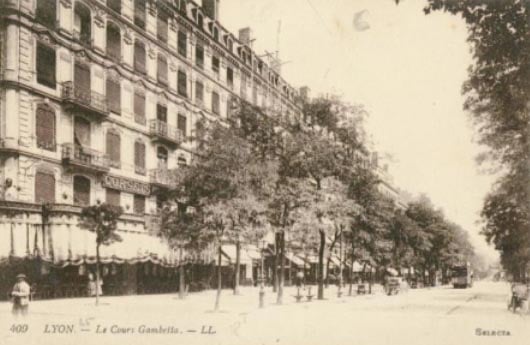 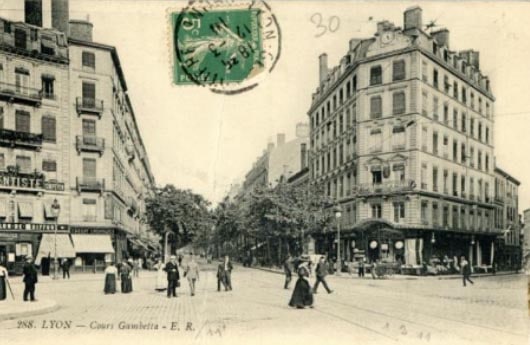 The building on the corner of the Place du Pont dates back to 1840. The pavements remain wide and along each of them is planted a row of plane trees which join together, providing significant shade and partially hiding the façades. The buildings are constructed in alignment. They mainly date back to the end of the 19th Century, alternating with others from the middle of the 20th Century, and then the end of the 20th Century around the Avenue Jusserand.
On Nos. 19, 32 and 61 a small Virgin and Child can be seen on the façade further away. Contrary to the custom of the Presqu'île, they are not at the corners of the roads.
At No.30: Opening of the cinema, Le Gloria, in 1920. It is renovated in 1954 and offers an auditorium that can take 715 spectators.
On 3 October 1978 Le Gloria closes its doors and reopens in December 1979 with the name, Fourmi Gambetta. In 1982 two new auditoriums are created.
On 30 April 1990: final closure. Since then various retail chains have established themselves here.
No.73 is a curious single storey house.
At No.87 the second floor is opened by a large glass window with opaque panes.
No.91 dates from 1900 with its two lions’ heads.

They have made their mark on the Cours Gambetta

Just a single hotel on the Cours Gambetta.

31 May 1935: The owner, Mr Chevalier, envisages the transformation of the building located at 30 Cours Gambetta into a hotel. He already owns a hotel in Rue Dubois in the second arrondissement of Lyon. Various studies were drawn up by Cabinet J.S. Palais
7 April 1936: The architectural practice, Louis Weckerlin, is called upon to draw up plans for transforming the building into a hotel.
July 1939: other more detailed plans are produced. The project is restarted at the end of the Second World War.
7 May 1940: the contracts with the companies are signed. Work can start. It will open with 14 rooms.
The future hotel will be called the Hotel de Noailles in homage to Louis-Joseph-Alexis, Count of Noailles, who was the member of parliament for the Rhone in 1815. The avenue perpendicular to the Cours Gambetta will also bear his name before being renamed the Avenue Maréchal Foch in 1929.
May 1995: The hotel is enlarged. Creation of 14 additional rooms. The hotel now has 28 rooms.
May 2020, rooms are renovated in collaboration with the By Architectes practice.

from the Place Bellecour
250